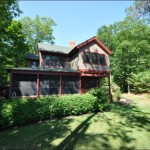 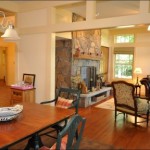 On September 5, 2012 at 10 PM Eastern Standard time, HG-TV's #1 rated show "House Hunters" aired an episode featuring the Winnipesaukee area.  Some of my Winnipesaukee real estate listings were filmed both on the interior and exterior, while others were seen only as brief "glimpses" from the lake.   "Hornets Nest Point" and 128 Veasey Shore Road's boathouses were shot as examples of iconic boathouse properties that add to the character of Winnipesaukee's shoreline.

Other familiar Winnipesaukee locations were shot for the show, such as the Town Docks in Meredith and the former "Front Dock" of "Idlewild", one of the oldest private summer camps in the country.  Idlewild is fondly remembered as the starting point of many lifelong friendships of former campers who live on Winnipesaukee today. 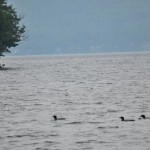 Loons near the former "Idlewild" front dock swim just before a storm breaks near sunset. 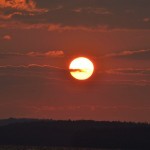 Sunset on Winnipesaukee near Cow Island

Boathouses were a large focal point for the the "house hunting" couple as they began their Winnipesaukee real estate search.  In the compression of many months of intense search into a 22 minute episode, few of the many twists and turns of the actual real estate search can be represented on the screen. As their real estate agent during the home search, I experienced a variety of surprises as my buyer clients' search criteria evolved.

Getting the opportunity to do the show also gave me more time to spend with a couple who are enormously kind, fun, and know how to make the most of life on Winnipesaukee! It was a reminder that spending time with people while they search for a lake home  is often a wonderful experience.

We were able to include in the "House Hunters" episode, footage of 20 Senter Cove Road, Tuftonboro, which Pam and Joe toured on the actual first day that they called me to begin their home search.  15 Olive Street, Alton, which intrigued the couple during their search, was also featured on the show.  It was an adventure to have "House Hunters" on Winnipesaukee and  to help the show get beautiful footage of the Winnipesaukee area.  Businesses in the community were very supportive. Matt O' Neil of the Meredith Marina, and my brother were very helpful on two different days in order for the camera men to be able to shoot homes, boathouses, and lake vistas from the water.  The episode aired September 5th at 10 PM Eastern Standard.  Episodes of "House Hunters" may also available be on the HG-TV website sometime after a show's original air date. 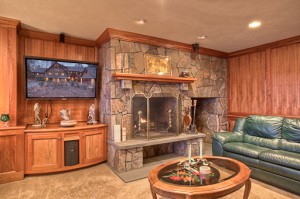 15 Olive's Street beautiful finish work in the media room is a selling point of the property and was very appealing to the "house hunting" couple.

The timing of this "House Hunters" is interesting as it airs as we begin the Fall season. Pending and contingent sales in the past month, show an uptick in Winnipesaukee waterfront real estate activity.  As of September 20, 2012 there are 16 contingent and pending Winnipesaukee owned waterfront home sales. 25 Leopards Leap, Moultonbrough offered at $3,499,000 is under contract, 147 Stanyon Road, Moultonborough offered at $849,000, and 76 Varney Point, Gilford, offered at $1,995,000 are all now under contract.  These properties are all gorgeous and I'm glad to see buyers have found them while great values such as these are still available.   As September draws to a close some Listing Prices are raised by Sellers while other Sellers reduce.  Visit my website next week for more sales data. 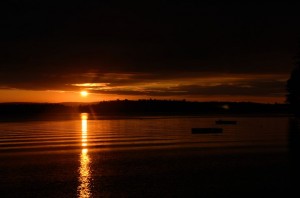